The Violence of Representation

There are no representations, only recapitulations of environmental structure adapted to various functions. On BBT, ‘representation’ is an artifact of medial neglect, the fact that the brain, as a part of the environment, cannot include itself in its environmental models. All the medial complexities responsible for cognition are occluded, and therefore must be metacognized in low-dimensional effective as opposed to high-dimensional accurate terms. Recapitulations thus seem to hang in a noncausal void yet nevertheless remain systematically related to external environments. ‘Aboutness’ heuristically captures the relation, and ‘truth’ the systematicity. Mechanical recapitulations of structure are thus transformed into ‘representations,’ which are then taken to be universal, so generating all the difficulties that arise when heuristics find themselves deployed outside the appropriate problem ecology.

We are all systems embedded in systems, worms in the wool. We are all components. And this, as it so happens, is precisely the way science views us. The so-called ‘violence of representation,’ as the continental tradition has it, primarily consists in the occlusion of the mechanical (as opposed to practical) systematicity that binds all cognition to what is cognized. The ‘violence,’ in effect, is a product of medial neglect and the resulting metacognitive illusions that lead to the presumption of representation in the first place.

To lay it out visually, consider the following: 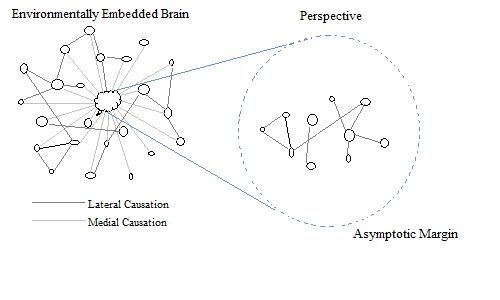 To the left we have the brain as a worm in the wool, as an environmental component that is causally sensitive, either actually or potentially, to a great number of other environmental components. These causal relations (represented by the light grey lines) are medial insofar as they enable the neural recapitulation of other causal relations (represented by the dark grey lines) extant in the environment.

To the right we have that brain’s ‘component perspective,’ what it can cognize (or metacognize of that cognition) of the environment as a component within that environment. All medial causal relations are occluded, given that the brain possesses no ‘meta medial’ means of recapitulating them. With the occlusion of medial causal relations comes the occlusion of componency: the brain cannot accurately recapitulate its functions, either relative to itself, or relative to the greater mechanism of its environment. Thus the asymptotic margin, the fact that recapitulations simply ‘hang in oblivion,’ as it were. What is not recapitulated in a given brain simply does not exist that for that brain. Since only a finite amount can be recapitulated (and integrated into conscious cognition and experience), what is recapitulated cannot be embedded within a greater network of recapitulations, and so ‘hangs,’ paradoxically finite and yet unbounded.

Here we see the power of the third-person, or the ‘view from nowhere.’ Medial machinery can recapitulate the causal continuity of lateral environments, but only at the cost of neglecting the continuities that make that recapitulation possible. The neural problem of ‘understanding’ a given environmental system is simply the problem of occupying the most adaptive mechanical position relative to that system within the causal totality of the greater environment. A position counts as ‘most adaptive’ when information accumulation becomes maladaptive–a waste of resources, in effect. But this relational ‘sweet spot,’ which is entirely due to the occupation of a determinate relational position within the causal totality, cannot be (readily) cognized as such given medial neglect. The brain can learn (via trial and error) that a particular recapitulation is optimally effective even though the how remains perpetually occluded. Deemed reliable, such recapitulations are inventoried as specialized cogs for specific mechanistic circumstance. Given medial neglect, however, metacognition is utterly blind to this dimension. Circumstance and what metacognition has misconstrued as mental representation hang together as if by magic. The informatic constraints pertaining to a given ‘view’ or ‘perspective’ no longer apply. This ‘anywhereness’ dovetails with the  apparent ‘from nowhereness’ pertaining to asymptosis.

We presume truth. Since the whole system is tuned to mechanically maximize mechanical reliability, truth naturally seems to be the primary function of mental representations. What is perhaps the greatest dead end in the history of human inquiry is born of apparent intuitive verities stemming from medial neglect.

27 Comments to “The Violence of Representation”