Notes Toward a Cognitive Biology of Theoretical Physics 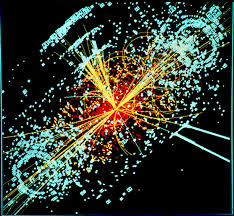 My favourite example of what I’ve been calling the ‘scandal of self-understanding’ is the remarkable—even gobsmacking—fact that we can explain the origins of the universe itself while remaining utterly unable to explain this explanation. You could say the great, grand blindspot in physics is physics itself. Imagine raising a gothic cathedral absent anything but the murkiest consciousness of hands! What’s more, imagine thinking this incapacity entirely natural, to raise rooves, not only blind to lifting, but blind to this blindness as well. Small wonder so many think knowledge an irreducible miracle.

This blindness to cognitive means reveals a quite odd condition on progress in physics: that it need not understand itself to understand nature. So far, that is.

Certainly, this fact is one worth consideration in its own right. Since heuristic neglect leverages a general, thoroughly naturalistic theory of cognition, its relevance should apply to all of our cognitive endeavours, including the very hinge of Pandora’s Box, physics. Since I have no skin in any academic game, I need not allow ingroup expectations pin my commitments to any institutional blind alley. I’m free to take original assumptions to problems invulnerable to existing assumptions. And even though I lack the technical expertise to make the least dent in the science, I can perhaps suggest novel points of departure for those who do.

Physics is far from alone in suffering this second-order blindness. Biologically speaking, almost all problems are solved absent access to the conditions of problem-solving. Motor cortices ‘know’ as much about themselves as the fingers they control. Cognition is almost always utterly oblivious to the contemporaneous act of cognizing.

Call this trivial fact medial neglect: the congenital insensitivity of cognition to contemporaneous cognizing. A number of dramatic consequences fall out of this empirical platitude. How does human cognition overcome medial neglect? Our brains are, as a matter of fact, utterly insensitive to their own biological constitution. They cannot immediately cognize themselves for what they are. So then how do they cognize their own cognitive capacities?

Given medial neglect, it simply follows that we must cognize problematic systems assuming what might be called meta-irrelevance, that no substantial knowledge of our knowing is required to leverage knowing. For instance, this present act of communication on my part requires that countless facts obtain, not the least of which is a tremendous amount of biological and historical similarity, that you and I share roughly the same physiology and educational background. If I were suffering psychosis, or you were raised by wolves, then this communicative exchange could only happen if we could somehow repair these discrepancies. Absent such second-order capacity, our communication depends on the absence of such second-order problems, and therefore on the irrelevance of second-order knowledge to achieve whatever it is we want to achieve.

Medial neglect entails meta-irrelevance, the capacity to solve problems absent the capacity to solve for that capacity. We can distinguish between the meta-irrelevance of our frame, the absence of defeating circumstances, and the meta-irrelevance of our constitution, the absence of cognitive incapacities. One of the fascinating things about this distinction is the way the two great theoretical edifices of physics, general relativity and the standard model of particle physics, required overcoming each form of meta-irrelevance. With general relativity, Einstein had to overcome a form of frame neglect to see space and time as part and parcel of the machinery of the universe. With quantum mechanics, Bohr and others had to overcome a form of constitutive neglect and invent a new rationality. When cognizing the universe on the greatest scales, your frame of reference makes a tremendous difference to what you see. When cognizing reality at infinitesimal scales, your cognitive biology makes a tremendous difference to what you see. In each case, you cannot understand the fundamentals short understanding yourself as part of the system cognized.

Our cognitive biology, in other words, is only irrelevant to cognitive determinations in classical (ancestral) problem ecologies. This explains why general relativity was more ‘insight’ driven, while the standard model was much more experimentally driven. General relativity, which belongs to classical mechanics, only strains meta-irrelevance (forces us to consider our cognitive capacities) at its extremes. Quantum mechanics snaps it from the outset. Resolving meta-irrelevance required conceding both methodology and intuition before physicists could report, with numerous provisos, the ‘quantum world.’ Understanding which classical questions can and cannot be asked of quantum mechanics amounts to charting the extent of meta-irrelevance, the degree to which our cognitive biology (in addition to our cognitive history) can be neglected. The limits of classical interrogation are the limits of our cognitive biology vis a vis the microscopic, the point where many (but not all) of our physical intuitions trip into crash space.

The notorious debate between Einstein and Bohr regarding whether quantum mechanics is complete and so reveals an exceptional (classically inconsistent) nature, or incomplete, and so reveals the existence of hidden variables, bears some striking similarities to debates regarding the nature of experience and cognition. If quantum mechanics is complete, as Bohr maintained, then our basic cognitive biology is relevant to our understanding of the microscopic. If quantum mechanics is incomplete, as Einstein maintained, then our basic cognitive biology is irrelevant to our understanding of the microscopic—the problem lies in our cognitive history, which is to say, the kinds of theories we bring to bear. The central issue, in other words, is the same issue structuring debates regarding the nature of knowledge and experience: whether the apparently exceptional nature of the quantum, like the exceptional nature of experience and cognition, isn’t an artifact of any incapacity on our part. The primary question, in other words, is whether our position or constitution is relevant to understanding the conundrums posed, on the one hand, by quantum mechanics, and on the other hand, by knowledge and experience.

With quantum mechanics, the collapse of meta-irrelevance, the need to identify and suspend cognitive reflexes (sort between questions), is compelled by the deep information cognitive ecologies devised by physicists. The more elementary things get, the less applicable the machinery of human cognition becomes. The meta-irrelevance of human cognition, you could say, maps out our ‘scalar neglect-structure,’ the degree to which knowledge and experience are geared to solve the proximate and granular. Science provided the prostheses required to extend our humble capacities to solve the macroscopic. Despite our ancestral neglect-structure, our basic cognitive capacities possessed cosmic applicability—we wanted only for the genius of Einstein to discover how. But when it came to the microscopic, the intuitive became a liability. “We are all agreed that your theory is crazy,” Bohr told Wolfgang Pauli once. “The question which divides us is whether it is crazy enough to have a chance of being correct.”

On the view sketched here, the fundamental divide between general relativity and quantum mechanics lies in the latter’s cognitive biological relevance. This suggests that quantum mechanics, if not the more fundamental theory, functions in a problem-ecology where general relativity simply has no application. Most physicists see quantum mechanics as more fundamental but their arguments tend to be formal and ontological as opposed to ecological. As we saw above, the independence heuristic, the presumption of meta-irrelevance, is the default, core to all our cognitive orientations—and this is as true of physicists as it is of anyone. Physicists understand the debate, in other words, with a tendency to overlook the relevance of their cognitive biology, and so presume the gap between general relativity and quantum mechanics is merely mathematical or conceptual. The failure of biological irrelevance, however, exposes the physical dimensions of the problem, how the issue lies in the constitution of human cognition.

Theoretical physics has always understood that humans are physical systems, entropic conduits, like all things living. But appreciating the fact of cognitive biology is one thing and appreciating the activity of cognitive biology is quite another. When we sweep away all the second-order clutter, quantum mechanics is something us organisms do, a behavioural product of the very nature quantum mechanics reveals. Our cognitive nature, the ancestral defaults geared to optimize ancestral circumstances, systematically confounds our attempts to cognize nature. Quantum mechanics shows we are natural in such a way as to stymy our attempts to understand nature, short theoretical gerrymandering via robust experimental feedback.

This raises the spectre that human cognition is constitutionally incapable of unifying general relativity and quantum mechanics. It could be the case that a nonclassical macroscopic theory could supplant general relativity and subsume quantum mechanics, but short the kinds of experimental data available to the pioneers of quantum mechanics, we simply have no way of isolating the questions that apply from the questions that don’t, and so sorting signal from noise. The truth could be ‘out there,’ lying somewhere beyond our biological capacities, occupying a space that only our machines can hope to fathom. If the quantum theorization of gravity fails, and it becomes clear that quantum mechanics is only heuristically applicable to classical contexts, then the cognitive biological position outlined here suggests we might have to become something other than what we are to fathom the universe as a whole. Re-engineering neural configurations via learning alone (theory formation) may no longer be enough.

The failure of cognitive biological relevance in quantum mechanics underscores what might be called the problem of diminishing applicability, how the further our constitution is pushed from our ancestral, ecological sweet spots, the systems we evolved to take for granted, the less we can presume meta-irrelevance, the more we should expect our cognitive biological inheritance to require remediation, lest it crash.

27 Comments to “Notes Toward a Cognitive Biology of Theoretical Physics”